White Supremacy is the Elephant in the Room

These are the remarks of Hometown Action Statewide Lead Organizer, Warren Tidwell, given at a protest on February 20th against the privatized prisons being planned for Alabama. Speakers from all over the state took part and brought a variety of perspectives. Warren chose to speak out against white supremacy and the history of the state that still holds us back and will continue to do so until we dismantle the power structure that's currently in place in Alabama. 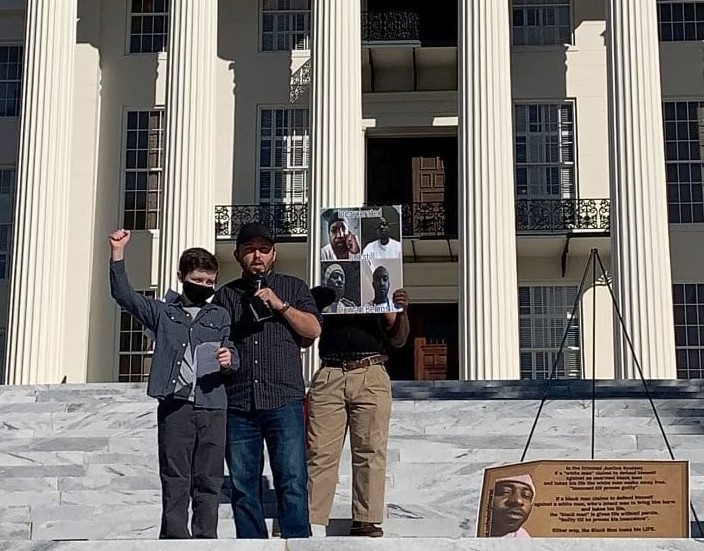 Hey y'all. I have my son with me today to hold my notes because I'm used to standing behind a podium. And I need notes because I get a little emotional when I talk about these things, but I believe we need to tell some hard truths in this state if we are going to address the problems that we have.

We need to have a conversation about the institutional and foundational issues that have gotten us here to this point in 2021. The first step in solving a problem is admitting you have one- and this state, and nation, has a massive one. We don't want to admit that either.

That problem is white supremacy.

I want to speak to that because it underpins every single major issue this state faces today. If we don't confront it we are never going to solve these issues. Since the beginning of this state our institutions have been built upon it. A war was fought to uphold it along with the institution of slavery. It goes all the way back to 1901 when the Constitution of Alabama enshrined it into law and it disenfranchised 181,000 Black citizens of Alabama who had previously been able to vote under the Constitution of 1875. When the Union soldiers left the South, well they began rebuilding the Confederacy.

Rather than lynching the treasonous men who launched the secession effort we built statues in their honor here in the South. There's ones looking down on us from atop the steps here at the capital, like the one of Confederate President Jefferson Davis. This effort by the Daughters of the Confederacy began in the early days of Jim Crow when another lynching campaign was underway against thousands of Black citizens in the South who faced racial terror that forced millions in the South to flee to cities in the North.

Throughout Jim Crow the Daughters of the Confederacy erected statues like these at the Capitol that went up in 1940, decades after the end of the Civil War. They rewrote history. They got into the textbooks and downplayed the horrors of slavery. We are still haunted by their actions to this day.

Now many who fought for equal rights in the 1960s are still with us and they're here with us today. William Faulkner once wrote "The past is never dead. It's not even past." That fact is proof of that statement.

They were up against the same power structure based on white supremacy that now seeks to make commodities of our people through these private prisons they're trying to build. Angela Davis famously said "Prisons don't disappear social problems. They disappear human beings". Now capitalism has made it to where they can produce profits.

We cannot fully address our mass incarceration issues without tearing down the systems that make it possible. That means dismantling white supremacy. The powers that be don't want that.

And what a setting to be having this conversation. We are on the doorsteps of the building where a rebellious nation was planned, built on slavery. We have statues of two Confederate slave owners looking down on us from the front of the building--and beside them is Dr. James Marion Sims, a man called the father of gynecology and lauded for his scientific advancements in women's health. But those advancements were made by experimenting on enslaved Black women with no anesthesia.

Now I have a question for the white folks who are here with me today. Why are you in this fight? Because until WE step up and take on white supremacy and the institutions built upon them we will be back here time and time again fighting the same battles over and over and over again.

And modern day white supremacy? It's not just cross burning. It is refusing to put yourself on the line to change a system that harms so many but was built just for you. It's replying "all lives matter" to "Black Lives Matter." It's saying Black Lives Matter but doing only that and nothing more to back up what you believe.

And y'all I'm so proud to be standing here today beside my son because I want him to hear these words too.

What does white supremacy also look like in 2021? It's the Daughters of the Confederacy as of today claiming the town square in Tuskegee based on a whites only lease from 80 years ago. It's passing laws to keep folks from taking down those monuments to treason in order to maintain the white supremacy status quo in Alabama. The past is never dead. It's not even past. 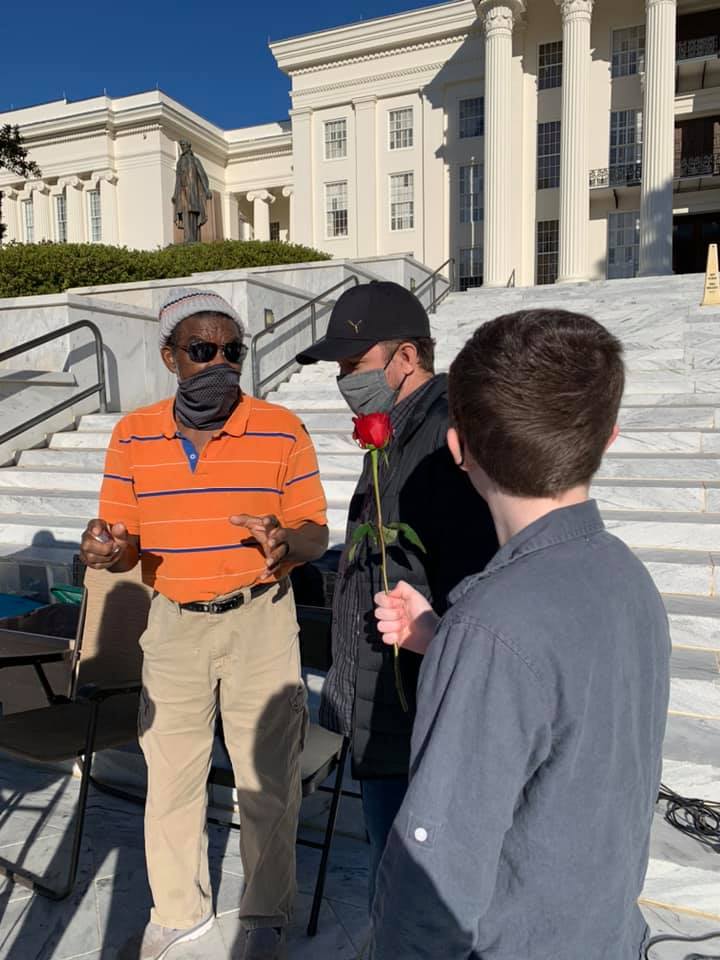 Now the punishment for prison is simply the loss of your liberty, your freedom. There is supposed to be reform and rehabilitation. Our Nation's constitution also supposedly bans cruel and unusual punishment. Now white supremacy is cruel and entirely too usual, too common. Because in that same document there is an amendment that bans slavery, yet contains a loophole when it comes to incarcerated people. This system is not broken. It's designed this way on purpose.

Yes we absolutely want to stop the prisons but we have to change the way things are done. Because I've had enough of the status quo. You're here today because you feel the same way. I'm here with young folks like the members of Alabama Students Against Prisons. They've had enough of it too. They're moving back here now. And rather than moving away they're staying. They want to change these things and build a state we all can be proud of.

A neo-confederate hate group in Wetumpka has said their Southern way of life is under attack. They're absolutely right. We are going to correct the historical record they've warped for their own ends. We aren't rewriting history. We are correcting it. To the Daughters of the Confederacy we ARE coming for your statues. We ARE going to take them down. We ARE going to change things.

We are putting all of them, and those like them, on notice that this is our state too. We are going to exorcise the demons of Jefferson Davis and his ilk. We are going to bury the lost cause of the confederacy lies that plague us to this day and we are going to build a good and decent society for everyone.

The past is never dead. It's not even past. But it doesn't mean we can't be honest about it, address it in the present, and build a better future.

Thank y'all for inviting me today.