We Must Defeat Roy Moore

The eyes of the nation are on Alabama. Many are wondering how we can be so dumb, especially as Roy Moore inches ahead in the polls even after 9 different women have come forward with stories of being sexually harassed and assaulted by Moore when they were young teenagers. To the outside world, Roy Moore is Alabama.

But to those of us who call Alabama home, we know the truth.

Alabamians have long been faced with a one-party state and crooked politicians. In Roy Moore, we see a toxic caricature of Southern culture that does not represent hometown values. We see a man using religion and a carefully crafted outlaw persona to exploit many in our communities who have known nothing but struggle and see nowhere else to turn.

Hometown Action is changing the narrative of small towns and rural communities in Alabama. We’re proving that communities can come together to solve problems regardless of race, class, sexual orientation, political affiliation, or the many other ways powerful, wealthy interests try to divide us. We’re determined to make sure another Roy Moore can’t come to power or prey on our communities. 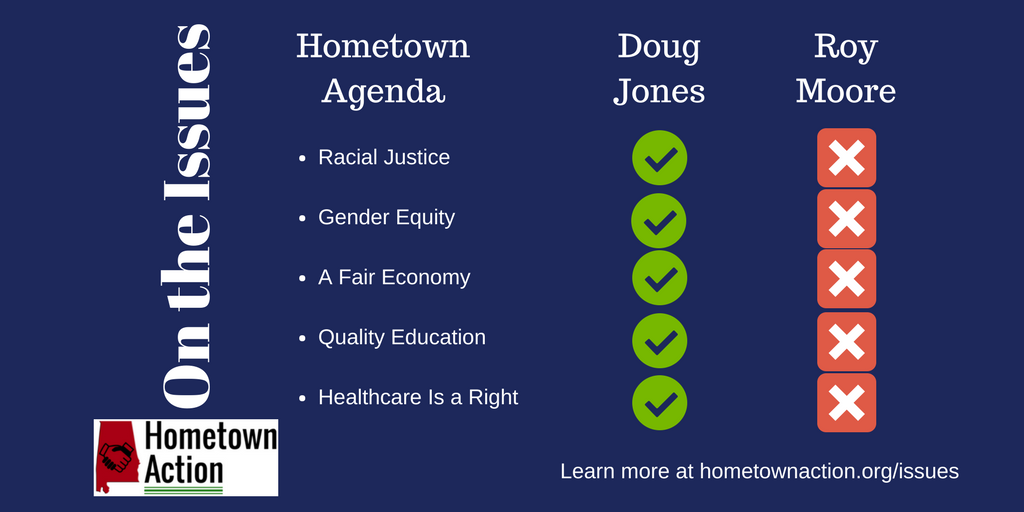 There’s a lot to be done for sure and the first step is defeating Roy Moore. That’s why we’re knocking on doors starting December 8th until election day on December 12th to remind residents to go vote and that they have a real choice in Doug Jones. This isn’t about party politics, but values.

Here’s how you can support our #DefeatRoyMoore campaign:

This election is only the beginning. Even in victory we must do the hard work of keeping Doug Jones accountable. Even more importantly, we will continue to build sustainable small town communities, develop hometown leaders, and bridge the rural-urban political divide for a stronger Alabama.