The View from the Ground: Response to anti-Protest Legislation in Alabama

Tuesday, March 9th, I attended a rally in opposition to House Bill (HB) 445, a proposed bill that would enact an overly broad and vague definition of “riot’. This proposed legislation is not unique to Alabama and is part of a wave of anti-protest legislation introduced all over the country in recent years. As of this week, there are 74 pending bills in 31 states. In Alabama, HB445 as currently proposed could potentially criminalize -- at the discretion of local law enforcement -- any loud and raucous gathering of more than 5 people  (i.e., tailgating, bbqs, parties etc) by defining it as a “riot”. Participants, including those standing by to provide water and support, would be subjected to a mandatory 48-hour hold, potential felony charges, and mandatory minimum sentencing with no possibility of parole. There is also a provision to ban anyone sentenced under this new law from holding public office.

“Be careful coming in, I already see Troopers out and about.”

This was the text message I got from a friend as I pulled into Montgomery Tuesday morning. The warning wasn’t surprising; multiple racial justice organizers had very publicly called for a rally against HB445, and some amount of increased security was expected. Which made what I saw that much more shocking. 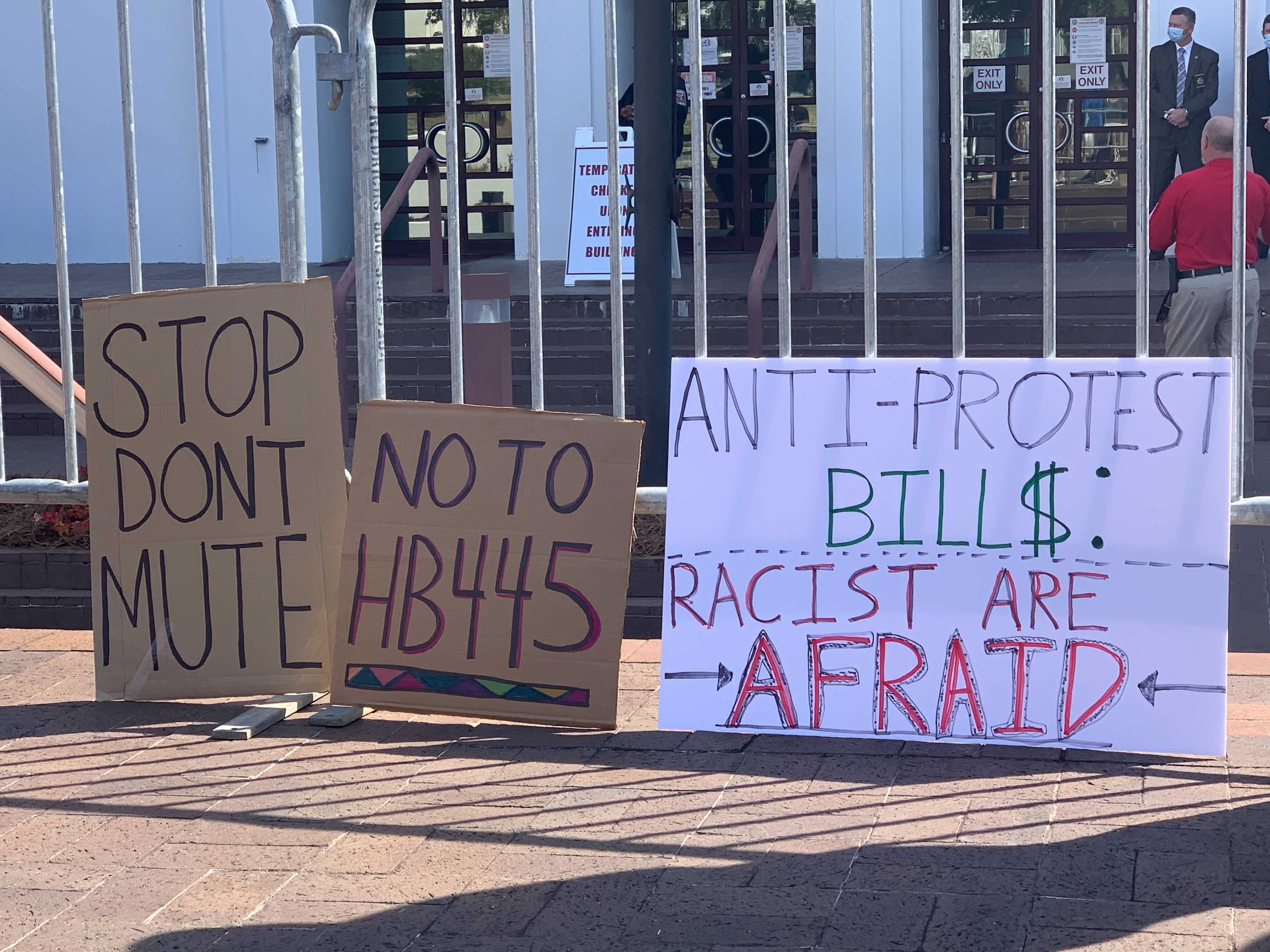 This preparation was in stark contrast to my experience only a week before when I participated in a similar rally against legislation (HB1 and SB10) that would prevent healthcare for trans youth. On that day, in the exact same location there had been a similar law enforcement presence more casually positioned on the corners of the block. No metal rails for police barriers, no officers outside guarding access to the front doors of the state house, and the usual few vehicles with officers watching from adjacent intersections.

The rally for trans healthcare had been planned with more advance notice and attracted nearly a hundred participants. We were loud, we chanted, and we marched around the State House multiple times. Yet one week later and with less than a quarter of the participants, we were anticipated to be more of a threat to security.

The difference this week? The rally organizers were Black women.

I walked alongside Satura Dudley, executive director of Cell A65, towards the state house where media was setting up for a press conference. It had been scheduled by several Black-led organizations with representatives who would be speaking before the House Judiciary Committee that morning in opposition to HB445. We were early -- only one other organizer and a couple of protesters had arrived, and we were very noticeably outnumbered by law enforcement.

After the press conference, a State Trooper initially denied the speakers entry. After several minutes of protesters chanting “let them speak”, a Capitol Police officer finally verified that they were in fact on the list to enter the building so they could testify before the House Judiciary Committee. We all cheered as the women were allowed inside. 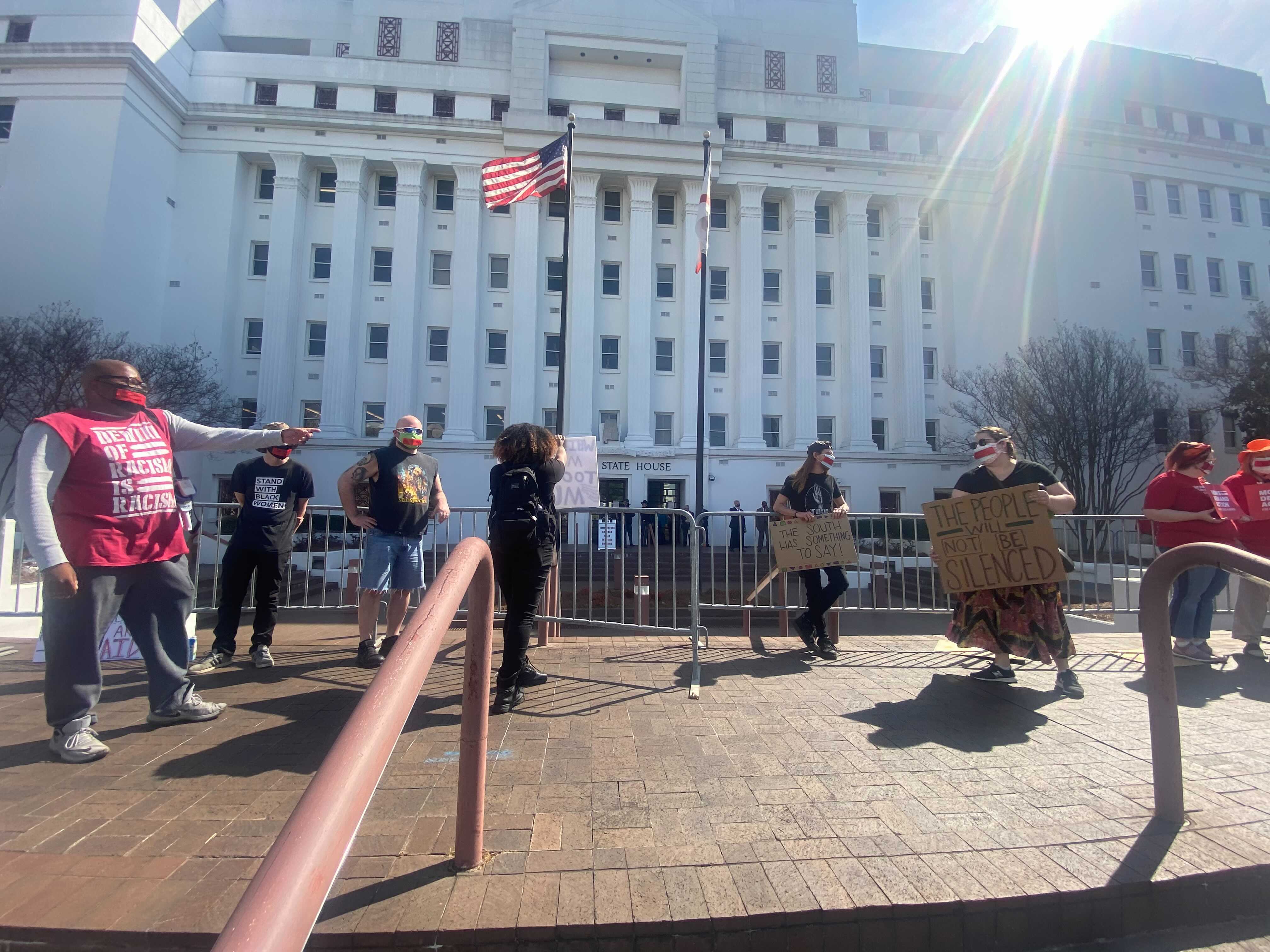 After the powerful testimony of the organizers as well as strong opposition from Black legislators on the committee, HB 445 was sent to the Public Health and Homeland Security subcommittee for discussion, chaired by Allen Treadaway, the original sponsor of the proposed legislation.

HB 445 is far from dead, and should it pass as written will pose a monumental risk to all protesters and greatly expand the definition of a riot to potentially include peaceful demonstrations and rowdy get-togethers. We cannot stand by and let such a blatant attack on our first amendment rights go unchallenged. We must let our representatives know this kind of legislation is unacceptable.

Hometown Action will continue to organize against HB445 and other proposed legislation (SB 152, SB 155, HB 516) in Alabama which threaten our rights to speak truth to power, unjustly prevent observation and monitoring of facilities and infrastructure affecting public health and the environment, and unnecessarily target local activists.

Your voice makes a difference!

Sign up to receive updates by texting PROTEST to 33777, so we can keep you informed about the latest developments.

With only a few weeks left in the legislative session, bills like HB445 can move quickly and we need your voice to stop them!