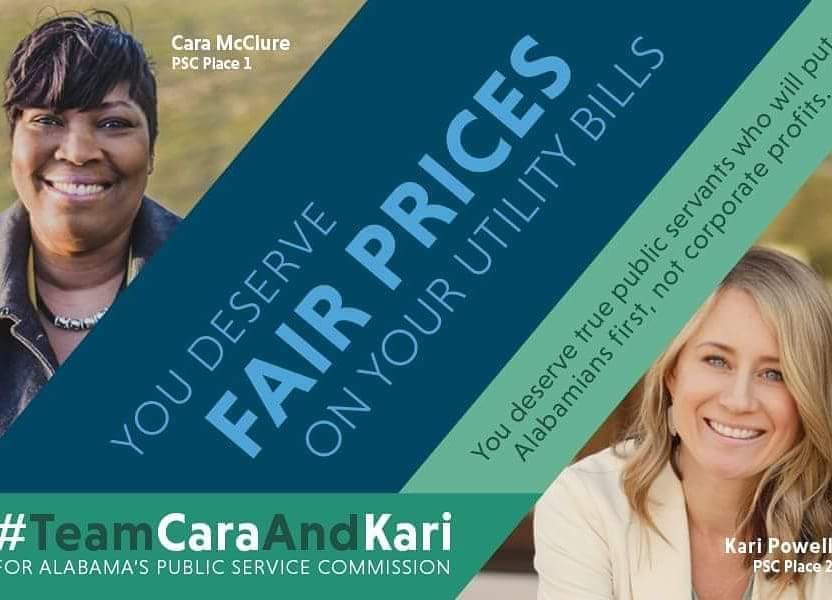 Over the past few weeks a committee made up of Hometown Action leaders all over Alabama has been discussing the prospect of endorsing Cara McClure for Public Service Commission Place 1 and Kari Powell for Public Service Commission Place 2. The committee has made the recommendation to support these candidates based on completed candidate questionnaires and the candidates’ commitment to Hometown Action’s Statement of Values. We are particularly impressed by their team approach and are asking our members to vote on the endorsement for both candidates as a team.

You get to cast the deciding vote.

Should we endorse Cara McClure and Kari Powell?

In their own words: “You deserve true public servants who will put Alabamians first, not corporate profits”

Kari Powell: “ Alabamians deserve fair utility rates, transparency, energy independence and the jobs that come with it.”  “I am running with the end goal of easing some of the financial stress Alabamians are under. Currently, Alabamians pay the 2nd highest residential energy bills in the nation. Other states hold formal rate cases every 3-5 years to ensure fair utility bills, but Alabama has not held one since 1982.”

Cara McClure: “As an elected member of the Public Service Commission, I can help bring the change to Alabama that we urgently need. My first goal is to bring immediate relief to the people who need it the most; the poor, and the rural folks who are often paying disproportionately higher electric bills than the average resident. It is time to stop raising utility rates on the people of Alabama to provide overinflated corporate profits for the utility monopolies in our state.”

Both candidates have individually pledged to meet regularly with Hometown Action members after their election, and will sign on to Hometown Action's Statement of Values.