The Alabama legislature has been in session for just over a month but lawmakers haven't wasted any time in putting forth bad bills that would harm marginalized people while ignoring the real issues facing our state.

It's no surprise given that HB1--which was pre-filed last year after the legislative session was cut short due to the coronavirus pandemic--has set the tone of unnecessary, yet harmful legislation in search of a problem. The so-called "Vulnerable Child Compassion and Protection Act" is nothing resembling compassionate and will threaten the lives of transgender children across the state. HB1 and it's companion in the Senate (SB10) seeks to criminalize anyone from health professionals to educators who would provide support or care for trans minors, including offering counsel and confidence. 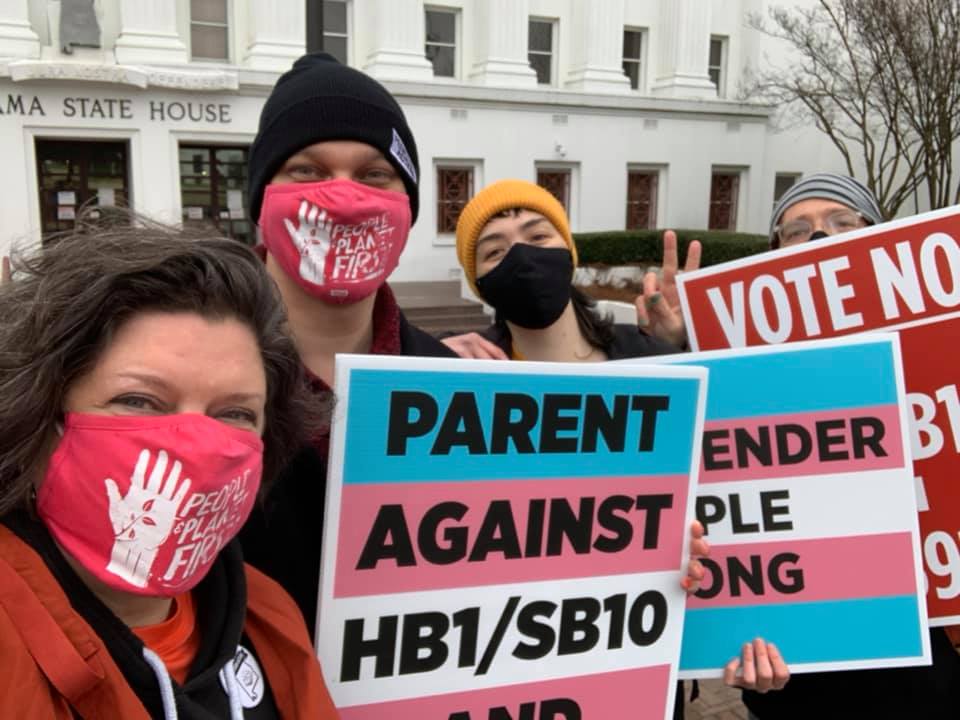 There are already numerous obstacles preventing trans youth and adults from accessing the necessary and life-saving healthcare they deserve. Removing what little support and opportunity there is constitutes a direct attack on transgender people. In fact these bills are part of a much larger coordinated attack on transgender people being orchestrated by groups like the Alliance Defending Freedom and being peddled in statehouses in at least 16 states.

The rhetoric used in these bills and by the people pushing them is designed to sound reasonable to anyone not familiar with trans issues. That's by design. However the reality is every mainstream medical association including the American Academy of Pediatrics say trans youth should have "comprehensive, gender-affirming, and developmentally appropriate health care that is provided in a safe and inclusive clinical space." These bills would outlaw evidence-based and life-saving care for trans youth. Children commonly have an understanding of their gender by age 3 or 4 and research shows remarkable consistency in gender identity amongst trans children, plus evidence-based medical treatments for youth such as puberty blockers are completely reversible.

A second set of anti-trans bills specifically targets trans athletes and would bar trans women and girls from competing in women's sports. Over two dozen states have introduced such bills including Alabama's HB391. One such bill has already passed in neighboring Mississippi.

While we are seeing a greater number of these bills this year, this trend is nothing new. Extremist politicians have been using rural and Southern state legislators for generations to attack the rights of women, queer people, and trans and nonbinary folks. It's a tactic that has allowed the far right to dominate so many state legislators, governorships, and the courts as part of a broader strategy to use these issues to reinforce notions of "traditional" gender roles that solidify patriarchal dominance in the service of racial capitalism.

So what do we do? FIGHT BACK!

Hometown Action is committed to building a multiracial, working class, trans/queer-affirming movement to build inclusive and sustainable small town and rural communities. Our members took to the statehouse last week in protest of these hateful anti-trans bills and have generated over a thousand messages to legislators to demand they oppose them. On Tuesday, March 9th, SB10 faces a committee hearing in the House Health Committee. Use this link to send a message NOW to each member expressing your opposition and asking that they not hold a vote on the same day as hearing public testimony.

CALL TO ACTION: TELL HEALTH COMMITTEE TO VOTE NO ON SB10

But we cannot sustain our movements on pure rage, as righteous as it may be. We also believe in Joyous Rebellion and this Thursday we will do just that! We are partnering with URGE to hold a Virtual People’s Hearing on Trans Health in Alabama on March 11, 2021 from 5-7PM. This will be an open 2-hour space that people are welcome to come in and out of, where trans and nonbinary folks will be centered as storytellers to share their experiences and/or grief with the state of trans health and healthcare in Alabama as well as to share poetry, song, and other forms of celebration of the diversity of trans life in Alabama.

Stay tuned for more legislative updates on these bills and other priority legislation.